Researchers at the University of Central Florida have developed a way to increase the broadband optical absorption of thin-film solar cells regardless of their thickness or intrinsic absorption. Thin-film technologies (less than 10 μm) reduce the material cost of solar cells and provide added flexibility. However, their reduced light absorption capacity results in lower cell efficiency.

To resolve this issue, the UCF researchers designed a layered solar-energy apparatus that uniquely combines the effects of coherent perfect absorption (CPA) and omniresonance optical phenomena. Thus, the invention improves the power conversion efficiency of solar cells independent of the materials used. Experimental results indicate that the apparatus achieved an increased external quantum efficiency (EQE) of 90 percent of the photocurrent generated in the 80 nm near-infrared (NIR) region from 660-740 nm, as compared to a bare solar cell.

The invention design consists of a visibly transparent planar structure that uses a CPA scheme to boost the absorption of a multilayer thin-film configuration. The configuration requires no surface patterning to overcome the intrinsic absorption limitation of the absorbing material. Besides planar structures, the device design strategy can also apply to on-chip implementations for efficient on-chip optical detection, strong-coupling with resonant materials, and the ultra-sensitive detection of pathogens. 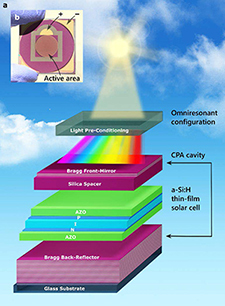 As shown in the example, the omniresonant, CPA-enhanced solar device (a) consists of a layered structure of a solar cell integrated into a planar Fabry-Pérot cavity with light incident from the top. The back-reflector and front mirror constitute a CPA cavity in the solar cell. The structure achieves omniresonance through a light preconditioning arrangement. The inset (b) shows a fabricated CPA-enhanced solar device measuring 25×25mm2. The circle in the center is the active area.

The research team is looking for partners to develop the technology further for commercialization.