The invention comprises a PVG and methods for fabricating it. A PVG operates by rotating the optical axis of a birefringent medium (a reactive liquid crystal) in space to generate a periodically and continuously changing refractive index along two orthogonal (perpendicular) directions. The birefringent medium of the PVG has top and bottom surfaces and a middle bulk region with a tilted, gradient, periodic refractive index distribution. The fabrication process can consist of linear photo-polymerizable polymers (LPPs) or photo-alignment materials for the surfaces and reactive mesogens or liquid crystals (LCs) for the bulk region. Figure 1 illustrates the PVG principles. 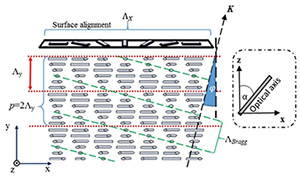 As shown in Figure 1, the optical axis in the surface of the PVG rotates along the xz-plane. The rotating angle (α) changes continuously and periodically along the x and y axes at intervals of Λx and Λy, respectively. A chiral dopant added to the birefringent medium causes the bulk region (such as a liquid crystal) to exhibit helical (spiral) structures. The structures provide another periodicity (Λy) that is perpendicular to the surface and generates periodically slanted refractive index planes. When the number of index planes reaches a sufficient value or thickness (eight to 10 pitches), Bragg diffraction occurs. The helical structure (left- or right-handed helices) makes the Bragg diffraction polarization-selective. Thus, the invention can reflect or transmit light beams, and it can split an incident unpolarized beam into two well-separated yet polarized beams.