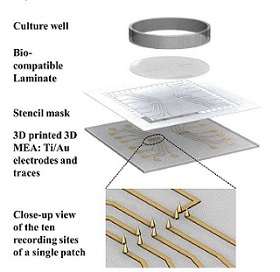 Exploded view of the 3D MEA: 3D microtowers, metallization, laminate insulation and containment culture well with a close-up of 10 recording sites per patch. Fully functional for “disease in a dish” and “organ on a chip” models.

UCF researchers have invented a new fabrication technology for 3D microelectrode arrays (MEAs) to stimulate and record electrophysiological activity from cellular networks in vitro. The novel technology enables manufacturers to produce 3D-printed MEAs with spin-coated insulation and functional electrospun 3D scaffolds. The culture-ready systems can be used as fully functional “disease in a dish” and “organ on a chip” models to promote cell/tissue growth and regeneration.

MEA technology has been widely-used as a platform for recording and stimulating electrical activity in electrogenic cells such as neurons, cardiomyocytes, and pancreatic beta cells for both in vitro and in vivo applications. Since the tissue environment is essentially 3D, there is an increasing need to extend cell culture matrices, support scaffolds, and microelectrodes to 3D form factors, as well. Yet, today’s MEAs are predominantly made using microelectronics fabrication processes or complex glass-based approaches that restrict their functionality to 2D applications. For example, they are unable to capture electrophysiological signals that occur at a certain height when cell cultures mature and obtain a 3D form. Additionally, creating a suitable insulation layer for 3D electrodes has always remained a challenge, due to diverse topographies for conformal deposition of biocompatible materials with a low thermal budget.

The UCF technology resolves these issues and enables manufacturers to fabricate 3D MEAs that are not only superior to their 2D counterparts but are also simple to produce using 3D printing techniques. In addition, the 3D nanoscaffolding enables a functional layer for accurate cellular placement, tissue engineering and complex 3D culture architectures.

The invention consists of methods and techniques for producing electrospun polyethylene terephthalate (PET) 3D scaffolds coupled to fabricated MEAs. The microfabrication technology involves the creation of 3D towers via 3D printing and a metallization layer, defined by stencil mask evaporation techniques. Multiple insulation strategies can be used with the technology, including the following: a drop-casted/spin-coated 3D layer of polystyrene (PS) and an evaporated layer of SiO2, both of which are laser micromachined to produce the 3D microelectrodes. 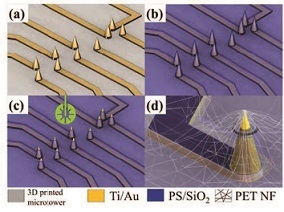